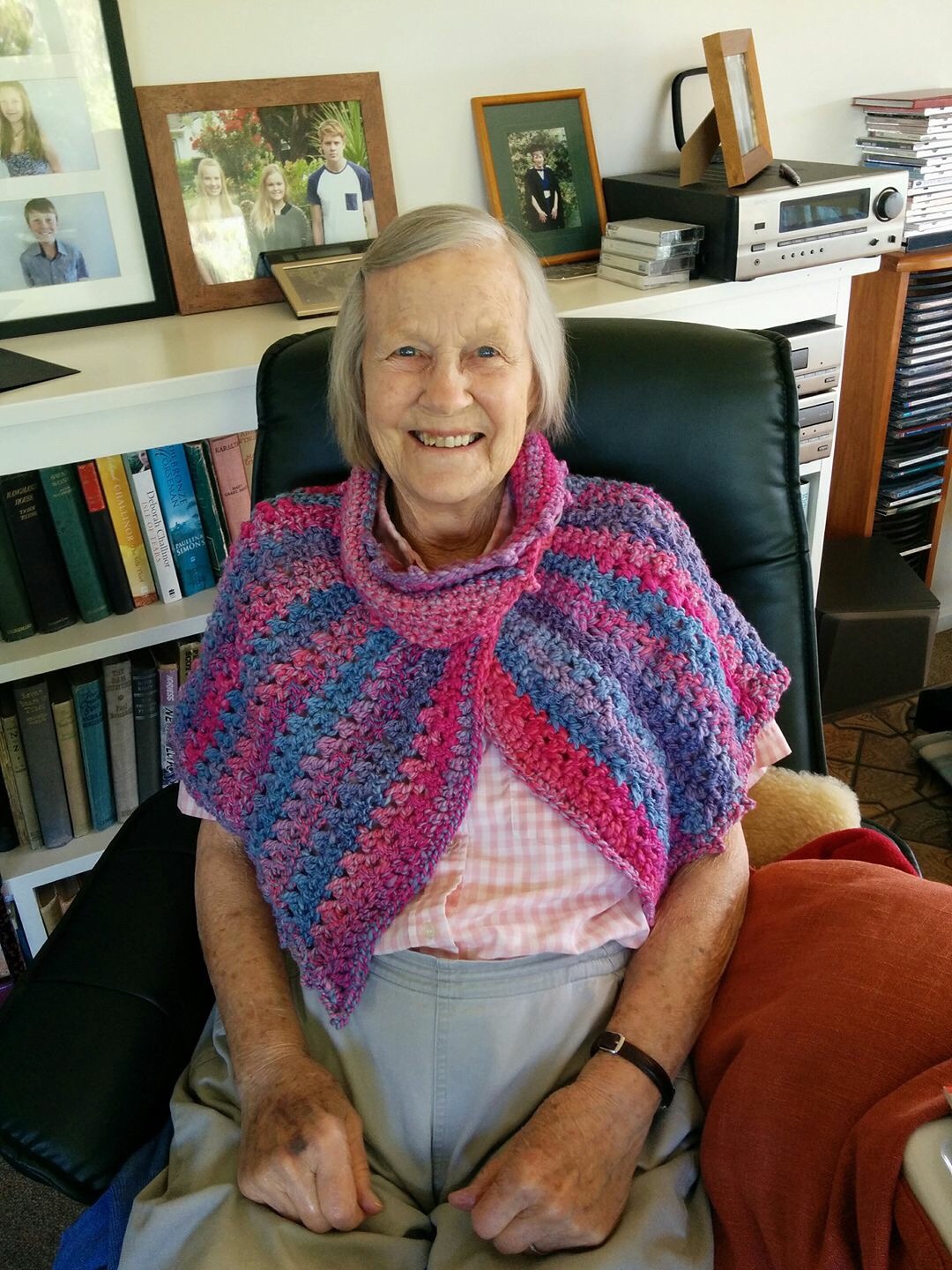 Ally was our gracious and sweet, warm, clever, fun Aunty; a “fine lady” as my brother Steve Edwards said; and in my sister Francie’s words: “Ally always gave me a warm feeling; the image of her welcoming soft laughing blue eyes is as clear as if she were walking around my beautiful garden with me right now.” 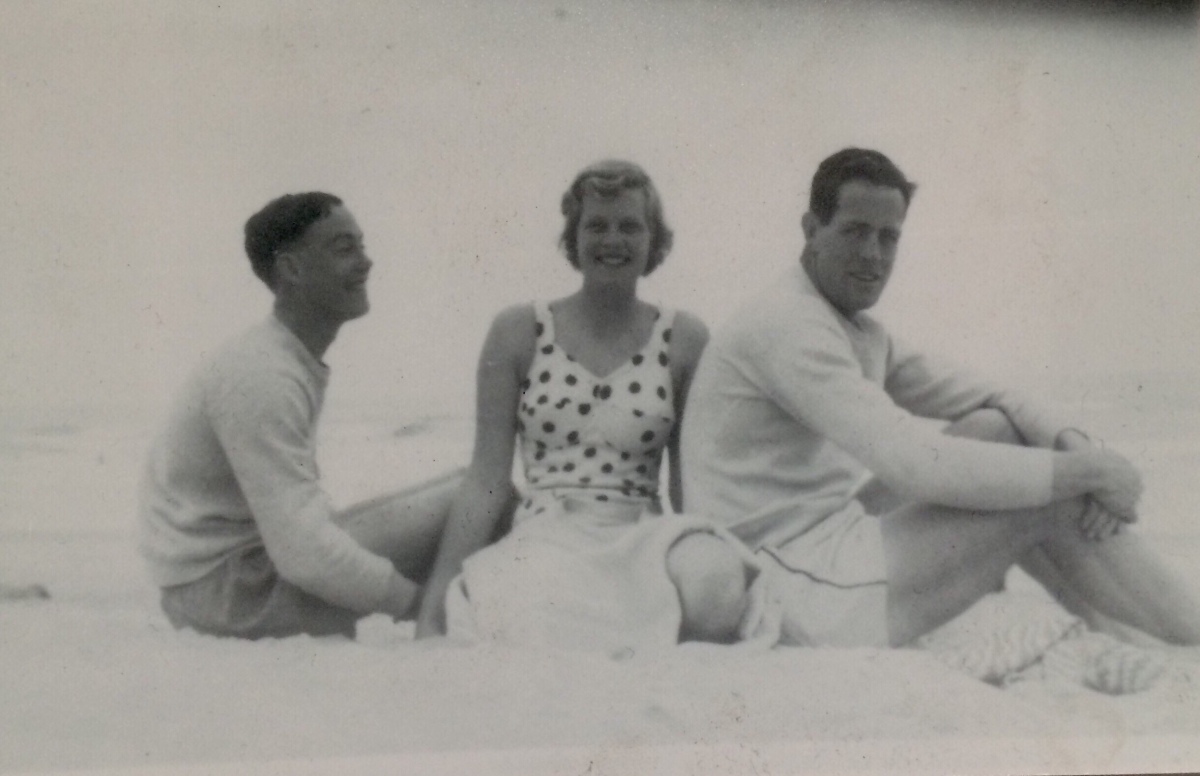 Ally has always held for me, such a sense of our Dad, her much loved older brother Tony, who died far too young at age 39 in 1966. The love she held for him was profound. Each time we talked of Tony, Ally’s eyes would fill and a tremble would enter her throat – she adored him and grieved him, quietly and deeply, as she did for her mother Esther, and her father, Adrian.

My brother Pete and his wife Deb remember what a loyal sister Ally was to her and Tony’s brother David … whenever she entered the room in his later life, Dave’s eyes would light up and he would beam with delight. Bob, and Ally supported him when he lost his beloved wife Margery very suddenly and during the trials of the ensuing years in New York and stayed closely in communication during Dave’s return and final years in Sydney.

Living as we did, in her Australian homeland ‘across the ditch’, we didn’t have a lot of contact as kids, more so as adults; but we all remember Jolly visits as embodying the very best of our Edwards family; our Mum Susie dearly valuing the chance to keep alive our Edwards family connection and her own loving relationship with Ally.

I clearly remember spending a special day with them both laughing and crying together at Papa ‘Teddy’ Edwards’ home in Sydney, sorting out his lifetime possessions, around the time Ally took him home to NZ nurse him in 1976, before his death aged 79.

Uncle Bob has facilitated my spending really quality time with Ally in the last 10 years and together they have honoured me with the gift of holding the Edwards history, including a fascinating driving trip to the family properties from Goulburn to Bombala in southern NSW. My promise to them both is to further impart that history for our wider family, particularly the vital role that our Edwards and Wilson families have played in the shaping of Australia, including tales of men with big vision and tenacity, of gold rush days and chasing bushrangers, horsemen and settlers, surveyors, station managers, graziers, landholders, and more recently, doctors, scientists and lawyers.

In a phone conversation with Ally, just some 10 days before she died, discussing the diary of our ancestor Louisa Edwards (nee Battye), we talked of the line of independently intelligent, warm and gregarious Edwards and Wilson women we come from. What I know and observe (as one lucky enough to be a member of Ally’s wider family), is that she has most assuredly passed on her legacy to her warm, intelligent, loving and gregarious children and grandchildren … some of whom are pictured here at her gentle wake, following her loving funeral service, which I was honoured to attend in Palmerston North, last Tuesday September 11, 2018. 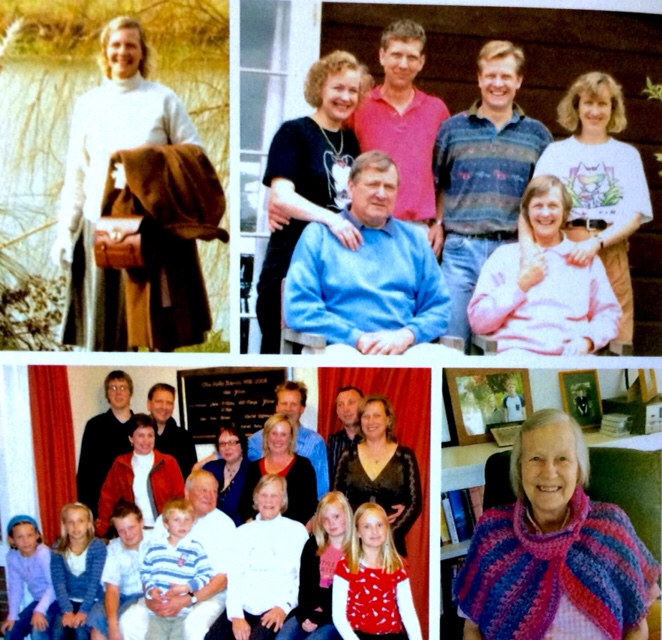 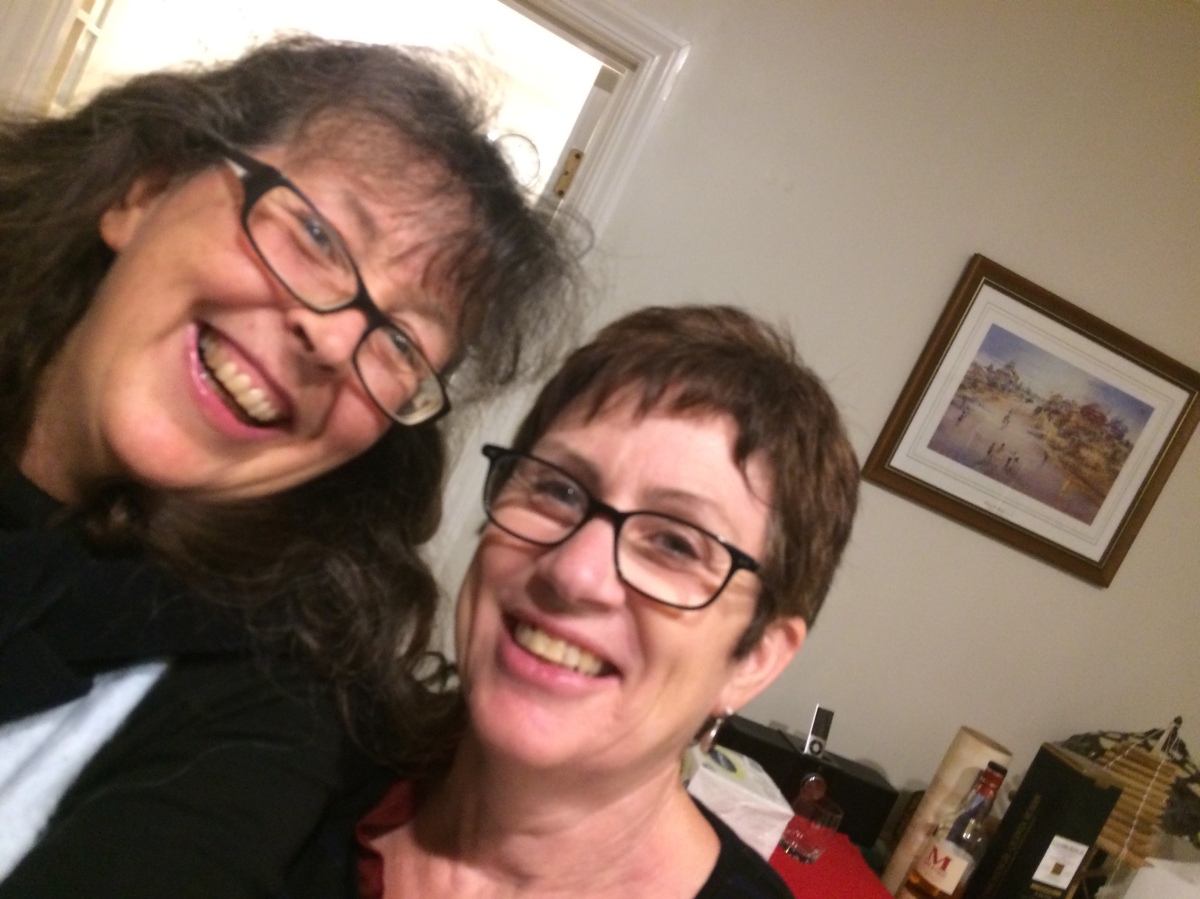 Ally was hugely loved, utterly loving and always, so very very lovable. She will stay alive in our hearts forever. RIP Aunty Ally… 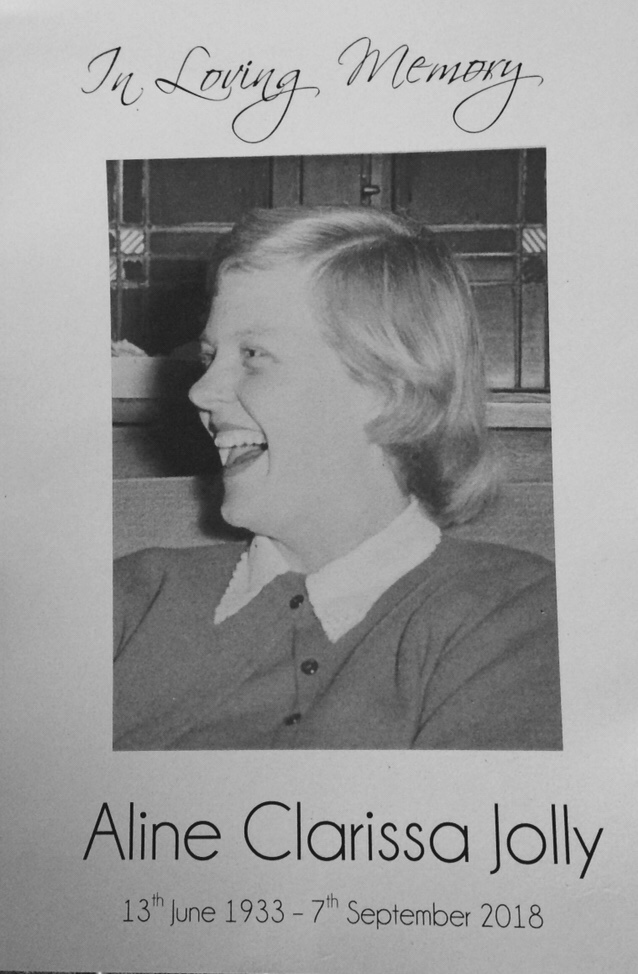 In 2012 I was companion to my 86 year old Uncle Pete on a trip to the UK to go sailing across the English Channel. For me it had the added bonus of stepping away from a difficult year of menopause and see my sister Fran, but for Uncle Pete it was pure and simply the chance to go for one last big sail with her and her husband Ed; a tradition he had done annually with the support of his children for many years in the latter part of his life.

So this journey was a significant drop in the ocean of his extraordinary life – where sailing, skiing, swimming, camping, and tramping were just some of the important balances to being a busy physician and sometimes farmer. For a boy from Bondi, who later became a Bathurst beef and sheep farmer, Uncle Pete brought as much commitment and enthusiasm to taking 9 kids and a dog in the old EH stationwagon to the beach for a body surf every summer Sunday morning, as he did in doing the rounds of his patients at RPAH or Bathurst Hospital, and teaching some of today’s finest physicians.

So on our UK trip together, I’m not sure who companioned who …I know he put up with me babbling on; but together with Fran and Ed, we took on the Navy hornets, coastguard helicopters and massive cargo ships; the wibbly wobbly sealanes and streets of the Channel Islands… we walked and talked; sailed and salvaged; laughed and learnt stuff; and we slept alongside each other … on bumpy planes, in the Crooked Cottage, below deck on the beating ocean in BettyAlan; and Peter even slept around the streets and towns of Essex. Sharing sleep with Pete was an honour I’ll cherish for the rest of my days, for he had mastered sleep, as he mastered life, with a laid back pace and an ability to (almost) instantly get his act together when called upon. Right to the very end, he’d seem to be asleep then a compliment would come his way, and he’d beam that grin with his crooked teeth and open his eyes and give you a twinkle. He taught me how to slow down on that trip, same way as he taught me so many things in his long life …by example.
On Monday, our Uncle Pete Harvey died, his big old heart gave up pumping at 89 and his big old feet won’t ever wear his new pair of crocs. What a big life we will celebrate this weekend back in Sydney; and what a family we will celebrate with…none better in my book. I can’t wait to be amongst Bill and Phil, Anna, Caro and Dave – to stand alongside with my Edwards siblings, Pete, Fran and Steve, as we send off our dear old man, our last elder.

Peter Harvey was so many things to so many people, but to me he was the best ever uncle who’s wasn’t our uncle; the perfect godfather who wasn’t my godfather; and truly the second dad who was my Dad’s best mate and took up duties to look out for us and our Mum, after Dad died in 1966 … forever onwards. To me, as the youngest of the big old Harvey-Edwards, he was a rock … one of my two Pete’s. He did many of the things Dad would have done: he included me always (only forgot me once on the Sunday surf trips); he introduced me to skiing as a teenager (took me to the top of the mountain and told me to follow him down … the first time – thank god for Dave); he took me and mum and Fran to Indonesia in 1973 along with all his kids and a few other strays – 18 of us on his medical tour haha; he gave the speech at my 21st when he coined the “bushwalk through life” – the analogy I still live by; he and Bertie stood alongside me at my graduation; they vetted my Gerry when he came into my life (and he got the big tick phew); and they came to see us at the birth of our kids. Together they both backed our dreams and our journey in glass and most recently, he backed the Pete Harvey artist residency/retreat at Zani Place, in honour of his namesake, his dear grandson and artist. And that’s only the landmark moments; I start to think about the ever-open-door the Harvey’s gave me after Mum died in 1979; putting up with a restless teenager every holidays; the countless student houses – thankyou Bertie – the never-ending love; and I start to cry. I have always had a clan of companions in my ‘bushwalk’ alongside the Harveys. Two of my old friends commented in the last 24 hours at how lucky I have been to have Peter and of course, Bertie and the whole Harvey family in my life, alongside me all the way. Such warmth and generosity and laid back love; and one of my cherished thoughts is that they did it for Mum and Dad, as much as for me. When I think about true friendship, companionship and family, I think about Uncle Pete, and though his heart may have stopped beating, the ripple effect will live on in our family forever.
Your bushwalk through life had so many meandering turns Uncle Pete … you held my hand and welcomed me to walk alongside. Thankyou. May your last journey be with sails full, and the view from over the horizon limitless.
with all my love to you and your beloved family