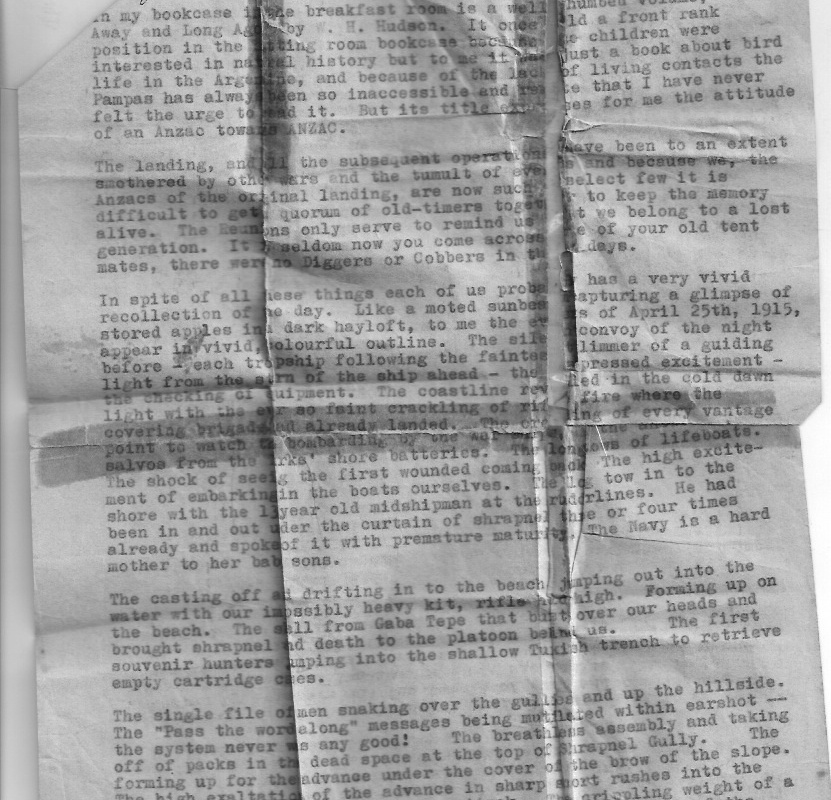 Transcript of a memoir by our Grandfather Hugh McCubbin, about his memory of the Anzac Landing at Gallipoli on April 25, 1915:

FAR AWAY AND LONG AGO by Hugh McCubbin

‘In my bookcase in the breakfast room is a well thumbed volume, “Far Away and Long Ago” by W.H.Hudson. It once held a front rank position in the sitting room bookcase because the children were interested in natural history but to me it was just a book about bird life in the Argentine, and because of the lack of living contacts the Pampas has always been so inaccessible and remote that I have never felt the urge to read it. But it’s title expresses for me the attitude of an Anzac towards ANZAC.

The landing, and all the subsequent operations have been to an extent smothered by other wars and the tumult of events and because we, the Anzacs of the original landing, are now such select few it is difficult to get a quorum of old-timers together to keep the memory alive. The Reunions only serve to remind us that we belong to a lost generation. It is seldom now that you come across one of your old tent mates, there were no Diggers or Cobbers in those days.

In spite of all these things each of us probably has a very vivid recollection of that day. Like a muted sunbeam capturing a glimpse of stored apples in a dark hayloft, to me the events of April 25th, 1915, appear in vivid, colourful outline. The silent convoy of the night before – each troopship following the faint glimmer of a guiding light from the stern of the ship ahead – the suppressed excitement – the checking of equipment. The coastline revealed in the cold dawn light with the ever so faint crackling of rifle fire where the covering brigades had already landed. The creneling of every vantage point to watch the bombarding by the war ahead and the answering salvos from the Turks’ shore batteries. The long rows of life boats. The shock of seeing the first wounded coming back. The high excitement of embarking in the boats ourselves. The long tow into the shore with the 13 year old midshipman at the rudderlines. He had been in and out under the curtain of shrapnel three or four times already and spoke of it with premature maturity. The Navy is a hard mother to her baby sons.

The casting off and drifting in to the beach, jumping out into the water with our impossibly heavy kit, rifle held high. Forming up on the beach. The shell from Gaba Tepe that burst over our heads and brought shrapnel and death to the platoon behind us. The first souvenir hunters jumping into the shallow Turkish trench to retrieve empty cartridge cases.

The single file of men snaking over the gullies and up the hillside. The “Pass the word along” messages being mutilated within earshot – the system never was any good! The breathless assembly and taking off packs in the dead space at the top of Shrapnel Gully. The forming up for the advance under the cover of the brow of the slope. The high exaltation of the advance in sharp short rushes into the teeth of Mustafa Temel’s counter attack. The crippling weight of a bullet in the right arm. The long lying out in the cover of the stunted shrubs. The complete separation of the mind in those hours of duress. First, the consciousness of the frail body pitifully exposed to the raw torment of rifle and machine gun fire and shrapnel that sent the leaves trickling down from the shrubs on to one’s head. Then the completely detached repression of the all pervading peace of a perfect Spring day, and last, the philosophical attitude of a portion of the mind that remained above the battle as it observed its tortured body with almost cynical appraisal.

The agony of a second wound – in the leg this time. The desperate stumbling back to shelter over the hill. The kindly hands that attended to the wounds. The stiff and broken trek to the beach. The long wait for stretchers and boats. The marvellous camaraderie and tenderness of the naval ratings. The ‘hell ship’ four days to Alex. The haven of a soft bed with white sheet and English nurses.

It is far away and long ago. You can’t take part in the March any more because your leg is crook. You feel sometimes that you have no right to be reasonably fit and well with all the good fellas gone. You wept silently when you saw your old Unit colours on the 2nd A.I.F., and had an eerie sensation that you were witnessing your own youth. You feel sometimes that being an Anzac does not mean much anyway. Maybe at this time some shrill voiced seven year old will pipe up at (sic) “My Grand-daddy was an Anzac!”‘